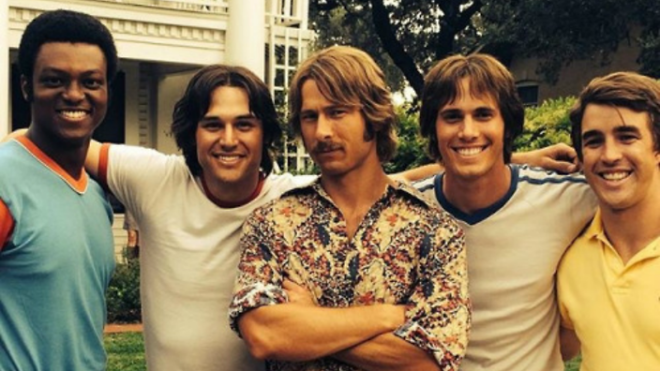 There’s one piece of housekeeping to get out of the way immediately when reviewing or watching Richard Linklater’s Everybody Wants Some!!, his newest “spiritual sequel” to Dazed and Confused.

“Spiritual sequel” is a stupid term that raises expectations beyond what they can deliver. We saw this earlier in the year with the “spiritual sequel” to 10 Cloverfield Lane, which featured 100% more John Goodman and 100% less monster than the original Cloverfield. I get that spiritual sequel is a term meant to draw attention to a work that covers at least part of what a director or writer has attempted to cover in another piece, but for now, let’s just say this:

Everybody Wants Some!! is not Dazed and Confused, nor is it really affiliated with Dazed and Confused. It’s a better, other chapter in Richard Linklater’s attempt to show what can happen when…. Really nothing happens, because so many of his films are more character driven than plot driven, but at the same time, so much happens.

The movie is about a group of baseball players partying it up before starting college in the early 1980’s. That’s probably the most succinct way to sum up what can be considered the plot. Over a long weekend, the guys meet up with each other, try to hook up with young women, party, drink, and wax philosophic about the stuff you did with your friends when you were that age. At some point they play baseball, because they’re baseball players, I guess? But there’s not a lot else to it.

The guys mostly get along, so there is no real antagonist. The closest we get to a traditional journey is the main character, Jake (Played by Blake Jenner) who finds himself pursuing a young, hot Theatre Major named Beverly (Zoey Deutch). Along the way, he doesn’t learn a lot about himself or the game of baseball.

The brilliance of this movie is hidden in the fact that all of these guys do have journeys they are either on or are just starting. The resident stoner, Willoughby, who does have a sort of heartbreaking arc in the story, says that good music “find[s] tangents within the framework” which is the most apt metaphor I can really think about for this movie. There’s the big, loud plot, the one that is described in the trailer that advertises this as a big, dumb, college sex-movie (not that there’s anything wrong with those movies, mind you) but all of the big revelations or moments about the movie are hidden deep within layers and layers of characters, from one character who knows he’ll never play pro-ball and living it up, to another who is way to dedicated to his long-distance girlfriend. (Remember, this movie is set pre-internet and smartphone, back when long-distance meant a lot of hard work. And letters.)

That’s deep for a movie that features several dudes getting duct-taped to a wall and having baseballs hit at them.

Overall, Linklater doesn’t just capture a timeframe as in the early 1980’s, when we weren’t quite with the loud pastels, but it also captures the spirit of what it means to be entering college. There’s a great scene where some of his roommates find Jake’s “all-state” letter jacket, and give him a hard time about it. It serves as that reminder that even though he was the best in high school, it means nothing to where he is now, and he gets to prove himself again. And he might not. Or will he?

The movie isn’t concerned with these moments. The movie is concerned with a bunch of guys, just enjoying themselves. It’s concerned with those little moments where we are discovering ourselves, but it’s not necessarily a giant revelation that will change the world. (Or us, for that matter.) And that’s so much about what works about this movie, that all of the characters, even the over the top ones, are the people that we can relate to. They’re people that exist.

Ultimately, though, I walked away from this movie hugely disappointed. Mostly because it was over, and I wasn’t hanging out with these guys anymore. It’s that great of a hang-out movie that you feel like part of the conversation. This movie has no antagonist (really) and is mostly scenes of people partying and talking. It shouldn’t work. It just does.