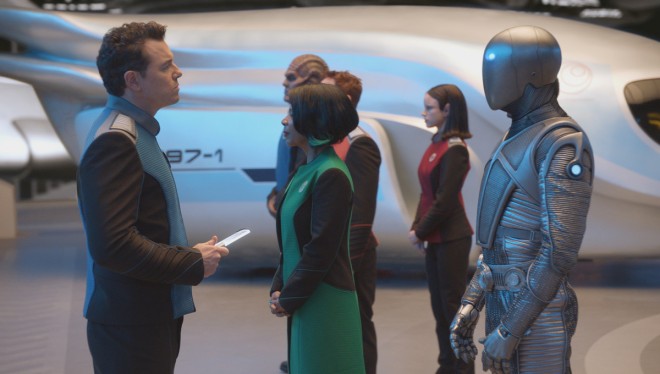 When I first saw trailers for the Orville, I was intrigued, but not intrigued enough to tune in. It looked like Star Trek, but if Star Trek were created by the guy that wrote Family Guy and had the “wacky” hook that the first officer and the captain were once married. Hilarity would naturally ensue. But wow, was I wrong. Not about the hilarity ensuing, that happens quite frequently. (In one episode an escalating prank war involves someone losing their leg. Then then leg coming back for a deus ex machina.) But the show has quickly grown into a must see television show, not just based on the writing, characters, or setting, but because it’s a wonderful throwback to a reminder of what it used to mean to be a science fiction fan.

As I mentioned, The Orville is basically Star Trek. Given the pedigree of the many people who have appeared on the show, either behind the scenes or in front of the camera, I don’t think anyone is going to take that as an insult. It’s about a starship (the titular Orville) exploring space for “The Planetary Union”, a takeoff of the Federation. There’s weird aliens, such as Bortus, the Moclan second officer, or Talla, the Xelayan Chief of Security, who’s super strong in Earth’s gravity. There’s also Isaac, the artificial life form who’s essentially Data/Spock/Odo and all of the other “outsider trying to understand humanity” aliens. It’s a show that emulates Star Trek, clearly created and helmed by someone who cares deeply for the show and wanting to do his own version. In this case it’s Seth MacFarlane, the creator of the show who plays Captain Ed Mercer.

These comparisons are meant as a compliment. The show, while having much of Star Trek baked into its DNA, it still manages to have its own unique feel.  Much of that is in the references to contemporary pop culture. For instance, Captain Mercer keeps a Kermit doll on his desk because he believes that he was a good leader who brought the best out in his people. It’s a funny joke, until you really think about it and you realize… it’s not that far off. Sure, The Next Generation loved a good game of Sherlock Holmes, (before the computer goes crazy and makes a real Moriarty) or Deep Space Nine loved its baseball stuff, but The Orville has a unique way of spinning these newer pop culture references into something interesting. There’s a particularly good joke involving reality television in the second episode.

Last weekend I went to go see Captain Marvel. I talked about it on the blog, and gave it my rating. In the last paragraph, I talked about the CGI used didn’t look as good as I thought it should be. I was thinking about that as I finished posting it: The graphics used to make it look like Brie Larsen, a woman who I think is amazing but cannot fly or shoot lasers out of her hands as far as I know, fly and shoot lasers out of her hands. Pretty convincingly, to be honest with you. Everyone is gearing up for The new Avengers movie, which features multiple heroes and franchises teaming up, something younger me has been waiting for since the Val Kilmer version of Batman made an offhand reference to Metropolis in a Batman movie. We are waiting on a television show that last showed a realistic looking ice zombie man riding an ice zombie dragon who just knocked down a realistic looking wall.

And there are complaints about all of these things. The CGI looks off. What’s up with that one dude’s hair? The show hasn’t been as good since it left the books. All traps that even I’ve fallen into when it comes to science fiction. As it’s become bigger, it’s become more scrutinized, more examined, and we keep wanting more.

I first started watching science fiction with my dad back when the dude from Roots put a banana clip on his face and that was supposed to make sure he could see. If you go back and watch old episodes of The Next Generation, it was obvious that they were on a budget – “forehead” aliens we used to call them because basically it was that: They all had different foreheads. But they weren’t so focused on the effects. The Phaser beam could look like a cartoon line as long as we were getting some good commentary. How many times did Worf just sort of… fall over when he was hit the wrong way, not in a super involved, high flying, wire based choreographed fight? The Orville, to me, is a return to that smaller science fiction. We don’t get sweeping shots of the bridge while there is a lens flair and a double holographic display that looks like it’s jumping off your screen. We get something simpler. The Orville is like a dose of nostalgia not by returning to something familiar, but in pog form, but by returning to a feeling of science fiction that I think I’ve been lacking lately.

None of this is to insult or take away from what we have today. I’m glad things are getting bigger, I’m glad that for the next month, I basically have my pick of whatever superhero I want to see, and I’m glad that I can look forward to new Star Wars, new Star Trek (a LOT of new Star Trek…. Like, more than we probably should), and new movies based on my favorite comics growing up, whether it be DC or Marvel. This is a good time to be a nerd. But as things get bigger, I do think we miss some of the simple joys of when you did have to dig into your imagination a little bit more. When the android isn’t motion capture enhanced by CGI, but clearly a man in a vaguely metallic costume with two lights where his eyes should be. Or the bridge isn’t this wide open space: it’s smaller, and if the camera panned out just a little more you’d probably see the lights.

That’s what the Orville really taps into for me. It taps into what made me a science fiction fan. The fact that it exists – that’s a big inspiration as well. Seth MacFarlane wanted to write a science fiction show, so he did. He wrote a good one, one that isn’t afraid to be silly or not take itself too seriously. A future where there is a push for peace and hope, not just in a far off future where green globs of gel make wisecracks in engineering, but today, in our own stories. And to me, that’s what science fiction is all about: Hope. I guess that’s what I can say for the Orville. It gives me hope.