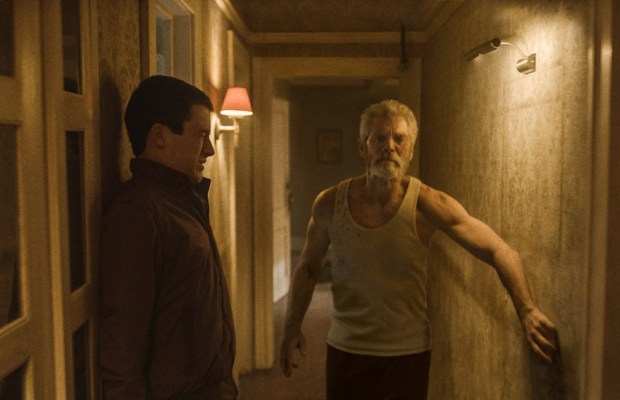 Home invasion thrillers are an interesting sub-genre of movies. They are a careful balance of thriller but in enclosed area: how do you handle a truly scary moment when relief is simply a doorknob away? Particularly when set in Detroit, which isn’t really known for their mansions right now. To make things more interesting, how do you root for who are clearly the bad guys in all of this? Don’t Breathe tackles all of these questions with varying degrees of success.

Don’t Breathe features three of the dumbest thieves to ever grace a movie screen: Rocky (Jane Levy) who wants to escape her abusive mother, so stealing is ok I guess; Alex (Dylan Minnette) a lost puppy dog so in love with Rocky it’s almost cringeworthy; and Money (Daniel Zovatto) Rocky’s boyfriend who’s so one note it’s amazing he lasts as long as he does. He’s also very unaware of how DNA evidence works.

Alex’s father is a security guard, and has a bunch of keys to homes in Detroit. After he steals the keys, they break into the homes (with Alex helpfully letting them know how little to steal so that if they get caught, they won’t be committing a felony) then make it look like a smash and grab, thus fooling the cops that can’t put together that every house being broken into is from the same company. Money gets a hot tip that there’s a blind man who’s daughter was killed several years ago received a big settlement, and because apparently banks don’t exist in Detroit and it’s the safest place in the world, he must keep the money in his house. So they decide to rob it, forgetting the fact that every sentence describing the Blind Man starts with “Iraq War Vet.” A dangerous cat and mouse game ensues between this Blind Man, and the idiots who don’t understand how blindness works.

I’m very conflicted on this movie. On the one hand, the premise is an interesting one: three criminals decide to go for an easy score to steal money from the house of a Blind Man, and slowly you start to get sympathy for them because, despite being idiots and thieves, they don’t really deserve everything that’s being thrown at them. Plus, Fede Alvarez directs this so beautifully that if it were any other type of film, I would describe it as almost Oscar-Worthy.

On the other, every character is so unlikable in this movie that I was rooting for the end credits, and I felt the main villain may have been the writers.

Let’s start with the good: this is a tense movie, and Alvarez knows how to play with the tight space in an interesting way: by showing you how much room really does exist in this tiny house. He swoops the camera through the rooms, showing you the important pieces, showing you how easily this situation could end if the characters just wanted it to end. There’s also the mystery of why this Blind Man would live in such a secluded house, which is originally written off as “he’s had a sad life” but gets deeper and deeper the more locked doors the criminals find as they move through the house. (More on that… and the spoiler… in a minute.)

A lot of time in thrillers, there’s a disadvantage as a viewer in that no one really feels in danger, because, for instance, Tom Hanks is the top billed guy and let’s face it, you’re not going to kill off Tom Hanks unless you’re trying for a level of sympathy your other characters can’t generate. But Alvarez never lets you feel safe. In every moment, something might go wrong, and there are no real “big names” to spare. The movie is a brutal one.

But that brings us to the main reason so much of this movie doesn’t work: the characters. Money is a one note thug that… and I wish I were making this part up… masturbates in the homes that they rob. That makes a line later that they can’t call the police on the Blind Man “because there’s blood in the house” almost hilarious, because it’s not like their DNA isn’t all over the place. Alex is a one note lovesick puppy who just follows Rocky around almost too pathetically. Honestly, I get he was supposed to be the one “good guy” of the criminals, but he has a pretty decent life, and he’s throwing it away for a woman who doesn’t love him. Rocky is the only character someone fleshed out, as we see she is desperate to get out of her situation, but it’s ridiculously over the top. She isn’t in an abusive household trying to save her sister, she’s in the equivalent of someone screaming that at you repeatedly for an hour so you can generate sympathy for a woman who gleefully stuffs all of the money an old guy has in a bag after watching her boyfriend get shot in front of her.

Then there’s the Blind Man. Spoilers… you see, the reason that he’s so isolated is that he kidnapped the woman who ran over his daughter, and impregnated her so he could have another child, with the idea that he would just honorably release her when he was done, because being kidnapped for nine months would buy her silence? Again, the need to go completely over the top to justify these characters’ actions takes us out of the narrative. It’s an interesting twist, and one that is actually hinted at… I give the movie credit for that… but it transforms this guy who’s part monster into an even bigger monster, and negates any real worry about calling the police. Which should have happened. Earlier. Because even burglars would probably get off once they got wind of the dungeon.

So, I’m very torn on this movie. Is it a deft thriller that turns the tables on our bad guys? Or is it a bunch of bad people doing bad things that needs to pull back from it’s own ridiculousness at times? I’m on the fence for this one, because the thriller part is amazing, but if there aren’t characters to care about, what’s the point?