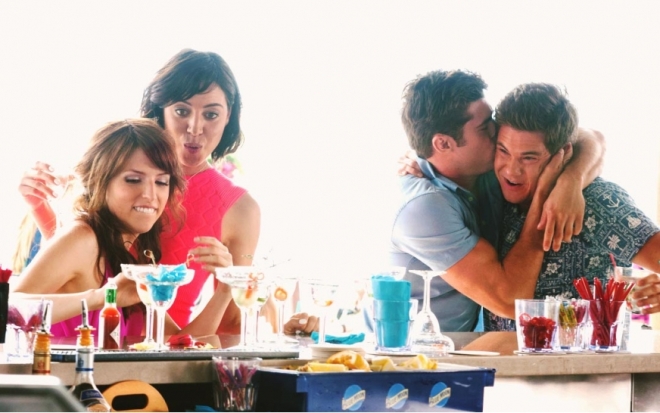 On paper Mike and Dave Need Wedding Dates, the mishmash comedy, should have been a slam dunk.

It stars Zac Efron, who’s hilarious when he wants to be, as noted in my earlier review of Neighbors 2: Sorority Rising. Adam DeVine is awesome as well, despite being generally known as “Who’s that funny guy on Workaholics and Modern Family? The guy with the strange voice? Yeah, that guy.” (And he should be a household name.) Anna Kendrick is her usual hilarious self, and could probably just release recordings of her reading takeout menus and I’d give it five stars. Aubrey Plaza is just funny.

It also stars Stephen Root! That man is comedy royalty, people. He’s Bill Dautrieve, Milton, Bubbles from Finding Nemo and/or Dory, Martin from Adventure Time… if you’ve loved a comedy performance in the past 20 years it was probably Stephen Root.

With a comedy team that was a Bill Murray away from being an Avengers-level comedy team-up, how did this movie fail to live up to expectations?

Mike and Dave Need Wedding Dates (which starts with “Based on a True Story”, setting the tone for what we’ll see next) is about Mike (DeVine) and Dave Stangle (Efron), two young men who love a good party, and are pretty famous for destroying family gatherings. In an effort to get them to calm down for their upcoming sister’s wedding in Hawaii, their father (Root) demands they bring dates to to the wedding in an effort to calm them down.

Yes. Find dates. To a destination wedding. “Hi, we’ve known each other for a few minutes, but how do you feel about flying across the country and an ocean?” That kind of pickup line.

In Stangle fashion, they go over the top and post an ad that goes viral, attracting the attention of Alice (Kendrick) and Tatiana (Plaza) who see this as a way to score a free trip to Hawaii. Hijinks… both wedding related and non-wedding related… ensue.

It’s difficult to say what I didn’t like about this movie, because on the one hand it falls squarely into the category of “didn’t live up to expectations.” And what does that mean to any of you, dear readers? What were my expectations of this movie? Obviously they are somewhat high as I listed off the pedigree of the actors in the movie. And they try their hardest to keep afloat a premise that loses steam pretty early on. (And with the trailers)

Mike and Dave were never going to pick anyone other than Tatiana and Alice, because it’s plastered all over the advertisements and because Plaza and Kendrick are the most recognizable names they date. The audience is aware early on (again, trailers) that the girls are “wild…ish?” and not the “nice girls” (whatever that loose definition is) that will keep the boys in check. We know they’re looking for a vacation, but it’s difficult to really fault them, since that’s part of the appeal of the wedding date… they get a free date.

The problem is that once again, this movie has a good strain of heart.. Kendrick’s Alice having been jilted at the altar and wanting to get over it, the co-dependence that all four characters suffer in their inability to separate from each other… these are real threads that are only given lip service. It’s almost as if there was a much funnier comedy with heart buried deep within some version of the movie, and somewhere along the line they said “screw it, let’s just go to Hawaii for a little bit and have someone get hit in the face with an ATV”. Because I guess moving when a giant red vehicle is headed towards your face is kind of hard?

The movie itself hits all the beats… the girls fool the boys, they all come to a realization, will Alice get over the loss of her fiancée? (yes). Will they realize their co-dependence on each other is unhealthy, but they can all still be friends? (What do you think?) It’s not that it’s horribly bad, it’s just… lazy. I expected more.

There’s actually a device really early on in the movie that I loved that could have been played up more: the credits are rolled over the epic moments Mike and Dave have during their family gatherings. They dance, everyone loves them… it’s epic. Later, when trying to convince them to get dates to calm them down, they’re show video of the same events… this time with the screaming and carnage they caused. That was pretty funny. It could have been played up a lot more into something better.

Overall, it’s an ok comedy from a group of actors that really could have done better.