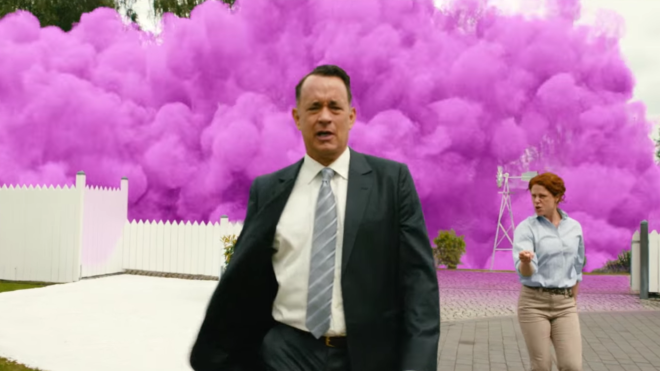 Posted on 19 May 2016 by fronzelneekburm Posted in Reviews And AnalysisTagged drama, Marissa Hock, review, Tom Hanks

Like Tom Hanks? Like Mid Life-Crisises by businessmen visiting the Middle East? Then A Hologram for the King, based on the novel by David Eggers is just the movie for you. It is about the aforementioned businessman Alan Clay (Hanks), who is a failing businessman who is trying to reestablish himself by landing a contract with the king of Saudi Arabia to provide the Saudis with 3-D virtual conferencing. The movie was directed by Tom Tykwer.

Hologram follows some other recent movies which take place in the Middle East like Whiskey Tango Foxtrot and Rock the Kasbah, and explores the culture clash when Americans attempt to live in this part of the world. Whether it’s a reflection of our own culture or how Islamic cultures perceive the West, the Americans always find and consume large amounts of alcohol (even though it is illegal), engage in some promiscuous activity, and partake in some crazy parties hosted in a Western country’s embassy. The locals are usually obsessed with outdated American pop music and business is conducted in a less formal and slower fashion than Americans are accustomed to. We also see the extreme class distinctions in the Middle East where individuals are either very poor/living in poverty or very wealthy. Hologram follows this general format and mixes in a health scare and a romance.

The movie did have some charms. I’m fascinated by how the Middle East is depicted in these sorts of movies – the desert landscapes, the camels, the food, the markets, the palaces and mosques, how the women dress, the slow pace of life, and other cultural nuances. Since I have never visited this part of the world I cannot tell you if this is an accurate portrayal, however, Hologram had enough of these features to hold my interest. The movie also has its comic relief in Yousef, Alan’s taxi driver whom Alan is forced to employ since he keeps sleeping past his alarm and misses the shuttle to the palace day after day. And while it was somewhat predictable, the romance between Zahra and Alan is sweet and somewhat refreshing. So while life in Saudi Arabia does not go according to plan for Alan, he gets his mostly happy ever after.

Overall, I would put Hologram on the worth watching list, but you may want to wait until it’s available to rent.