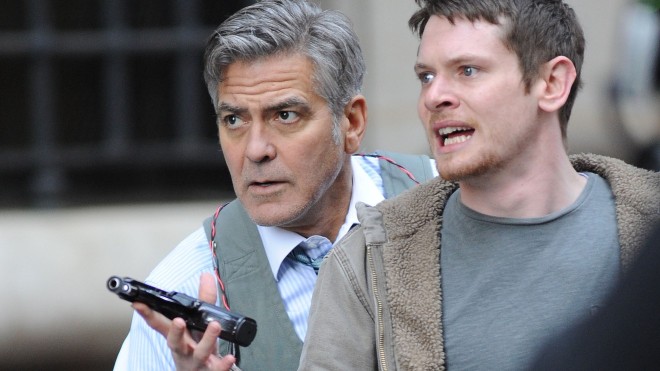 There’s a part late in Money Monster, the latest from director Jodi Foster and professional handsome man George Clooney (of Batman fame) that, for me, sums up the movie perfectly. After our villain, Walt Camby (played by Dominic West, missing only a top hat, mustache, and damsel tied up on a train track in front of him) is accused of the many things he is accused of in the film, he turns to his PR Lady Chief Communications Officer (Caitriona Balfe), whom he kissed earlier in the film implying a relationship beyond boss/CCO and says, “You know me better than anyone! You know me better than my wife!”

It’s a moment that is supposed to play off with shock but is met with boredom, non-surprise, and attempting to add another layer to the whole idea that who we’re dealing with is not a nice person. Not to mention the fact that, during the many scenes where people are trying to locate him, no one thinks to ask his wife.

Money Monster is about Lee Gates (Clooney), star of a popular Jim Kramer-esque financial advice show called, aptly, “Money Monster”, complete with all the silly antics featured on the real Jim Kramer “Mad Money” show, just like you remember back in 2009 when it was last relevant. Gates and Patty Fenn, (Julia Roberts, of Oceans 11 fame) his long suffering director who is getting ready to quit, are forced into a tense standoff with an armed man who lost thousands investing in a company that Gates suggested, which just lost a lot of money due to a computer glitch. With the CEO missing and no one really looking into the situation, everyone is placated except Kyle Budwell (Jack O’Connell), regular citizen taking action into his own hands.

The problem with the movie is basically that… it starts with an $800 million dollar mystery, but no one really seems to be talking about it other than Budwell, and Gates, who’s preparing to do a softball interview at the start of the show. No one really seems to care about the central mystery… $800 million dollars and the CEO of a major company have suddenly vanished. There’s also the fact that, when we do get the answer (and while I won’t post spoilers, you can figure it out on your own in about five seconds) that it makes very little sense as it has nothing to do with the rest of the movie.

The movie isn’t sure what it wants to be. It could easily be about the dangers of a Jim Kramer, “finances are hard so here are some pretty graphics and ladies dancing” type yelling. It could be about the financial collapse and the frustrations everyone felt a few years ago, as the rich managed to eke by with their millions. It could even be about the Patty/Gates relationship, as he clearly needs her. But it doesn’t want to be about any of those things, it wants to be about all of those things, so it doesn’t spend any time doing any of it well.

The toughest part is that the material doesn’t play to the actors’ strengths. Gates is supposed to be a charismatic and we’re supposed to believe that he hasn’t eaten dinner alone since the 1990’s, but here he doesn’t use any of that charm. He’s played by George Clooney. The man has charm even when he’s in a Cohen Bros movie, all of which play on the fact that he has charm and sees what happens when they take it away. Julia Roberts is supposed to be the calming force of the movie, but spends too much time panicking. What’s worse is there are a bunch of characters that sort of enter the film, then leave with no explanation. Kyle’s pregnant girlfriend gets a few minutes to yell at him for being a loser, then isn’t brought up again. Camby was conspiring with someone in the office (who then tries to fire the CCO) but isn’t really brought up again… during the Scooby-Dooesque reveal segment, where Clooney is finally allowed to shine, the presence of that guy might have been, you know… important.

I wanted to like this movie more. It’s just that it’s overall kind of a mess. Even the ending, which the audience is walked through, step by step, is still a bit of a letdown, and makes very little sense, and doesn’t know what kind of statement it wants to make about anything. You’d be best waiting for this movie during it’s many future runs on lazy Saturday Afternoons on whatever channel picks this up.