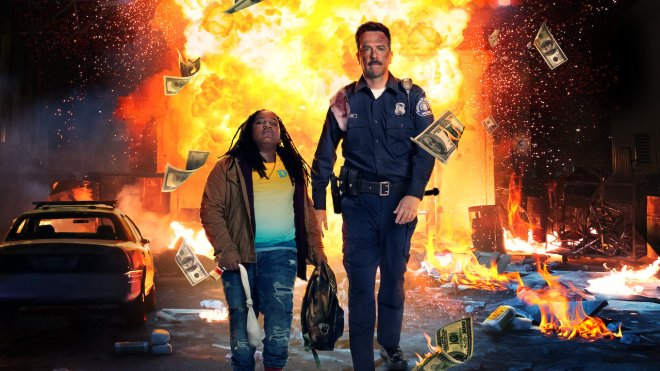 I grew up during a golden age for cinema: the 1980’s. It was a time when bullets couldn’t affect any man that mastered the high kick. Special effects were truly special, and you had to fill in a lot of gaps with your imagination. And the hair was feathered so high they had to actually make screens bigger, lest the actors head’s didn’t fit on frame. But mostly, it was the time of the buddy police comedy.

If there was a mismatched pair, they would be teamed up and forced usually to fight crime. Why were they teamed up? It didn’t matter, the flimsiest of excuse would be made to put together a Tango with a Cash, a Turner with a Hooch, or a cop with a cop and a half. And their antics would be more than enough to overlook causal moments of child endangerment or whether the guy three days from retirement would ever retire, despite the fact that he was three days from retirement for the past four films.

Which is why I turned a curious eye towards the new Netflix Original film, Coffee and Kareem. The title alone is enough to bring us back to those days of mismatched buddy comedies. You see, the film is about a cop named Coffee, who has to team up with his girlfriend’s kid named Kareem to take down a group of dirty cops. You see, Kareem is quite the little scamp who dislikes the fact that his mother is dating anyone, much less a cop, and as a result tries to get him killed. In the process, they end up accidentally witnessing a murder, Coffee gets framed, and they’re on the run.

The movie itself is never really sure of what it wants to be. Once you title your movie Coffee and Kareem, you’re already entering an area of sweatiness that needs to be made up by either going full meta or playing everything completely straight, and this movie never quite hits that groove. On the one hand, Ed Helms (the guy who’s not Steve Carell in the Office and not Zach Galifianakis in the Hangover movies) does his best with what he’s given. He plays a lot of it in a heightened, exaggerated state that seems to be in on the joke, while at the same time trying to take it a little more seriously in places, especially when Coffee is just not as cool as… well anyone. He’s not as cool as anyone. He’s playing the Ed Helms type who is very much aware that he’s the Ed Helms type.

However, it relies a little too heavily on the whole “hey look kids are being foul mouthed and brash!” schtick that seems to be on the rise lately. Terrence Little Gardenhigh is hilarious in this role, and when given the chance he’s got a few good moments of showing us that there’s a scared kid behind the bluster, especially when being threatened. The problem is he doesn’t get a lot of time to show this, and mostly spends his time falling back on making sure we know how Ed Helms-y Officer Coffee is acting.

Which is a shame, because there’s a lot there in this movie, and there’s a lot that could be done with it. Coffee is a cop, one who believes in the ideals of being a cop while also being surrounded by nothing but dirty cops. He’s also someone thrust into a community that doesn’t necessarily trust cops, and so much more could have been played with in that rather than another opportunity for Kareem to just generically hate Coffee because he’s dating his mom. Which is valid, and one of the few things that makes this film interesting. (like everything with Betty Gilpin and her character. I’d love to know what movie she thought she was making.) That’s really the sum of the problems with this film: it’s not really committed to anything. It walks everyone right up to the line of doing something interesting, then manages to walk it back as soon as possible because then it might say something accidentally that’s not outrageous enough out of Kareem’s mouth.

I put this on because theaters are closed. This is the longest it’s been that I’ve not been to an actual movie theater in easily 20 years. I wanted to just watch a movie, and get lost in what it was that I enjoyed about movies in the first place. The ability to look at them, sort of analyze them, and to just get lost in the story that’s unfolding. I will say that if theaters were still open, this would probably be one of the movies I would see. It’s a very dumb movie, but it’s also a lot of fun in it’s dumbness. Yeah, I can complain, but the movie itself hangs a lot on the stupid pun that is its title. I recommend it, if only as a reminder that during this time we need stupid movies to take our mind off of things.