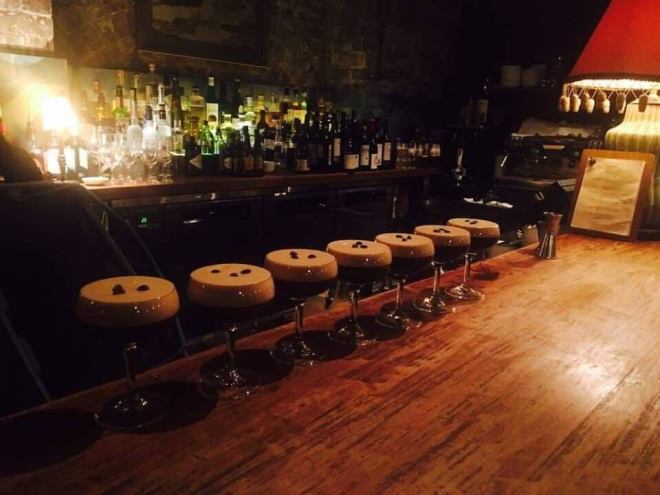 Enjoy result of this prompt: “Two characters walk into a location. The narrator tries to get them to leave.“

A priest and a rabbi, against all better judgement, walked into a bar. They did this every Thursday night at exactly 7:09. They always met on a Thursday because it was a nice way to unwind and get themselves ready for their respective weeks, and they always waited until 7:09 because happy hour was well underway but not yet over, so they didn’t seem to eager to start drinking but also didn’t want to miss out on any deals. But it was their favorite bar, so they walked into this bar many times.

It was the Priest’s turn to pay.

If this seems like a cliché, it very much is. Fortunately, they were ready to leave the bar and go do something more interesting any second now. Tonight was a new night, filled with adventure, and brand new possibilities.

“I think we’ll stay,” The Rabbi said. “That one sports team I like is playing tonight, and I want to see if they win their game.”

This was a big surprise to the Priest, who never knew the Rabbi to like any sport, much less the particular sport that was on television right now, at this moment.

“Did you put money on the game like you did last time?” The Priest said, to the surprise of certain narrators.

“Why would I? They’re bums,” the Rabbi took a long sip of his beer. It was long, yes, but it was still only a sip, meaning that the pair would be sitting at this bar for an undetermined amount of time, but the slow long slip meant that it would be a long time, regardless. Which means they wouldn’t be getting up and doing anything more interesting than sitting there. In a bar.

A priest and a rabbi who already walked into a bar.

The Rabbi took ANOTHER LONG sip of his beer. The Priest hadn’t even started on his, it just sat there, getting warmer, like he wanted to drink a warm beer. “You know, Father, I could sit here all night.”

Which was ridiculous, because why would a Priest and a Rabbi sit in a bar all night.

“You haven’t touched your beer,” the Rabbi finally noted, hopefully moving things along. He brought his beer thoughtfully up to his lips, then lowered it again. “Is everything ok?”

The Priest smiled and took a drink of his beer, probably noting that it was warm even though it hadn’t been sitting out that long, one might think. “It’s just going to be a long week.”

“I keep forgetting, you Catholics always with the celebrations and the feast days,” The Rabbi responded, NOT taking another sip of his beer.

“No, it’s that wedding I was telling you about,” The Priest said, not drinking their beer, letting them know that they would be in this bar EVEN LONGER.

“It’s terrible to feel rushed,” the Priest said, seemingly to no one in particular, but obviously pointed somewhere.

The bartender, who had known both the Priest and the Rabbi for many years and knew that even though they came here every Thursday night at 7:09, thought that a change of pace would be nice for them simply said, “Don’t worry about it, guys. You’re welcome to stay as long as you need. In fact, I took your advice and I am going to ask Amy to marry me, drinks are on the house all night.”

“I’m so glad to hear that!” The Priest said. Who knows if he even remembered about the beer at that point, which is probably getting too warm to drink. Not that it mattered, since he got them free.

“That’s wonderful, we should be celebrating!” The Rabbi threated to spend even more time in this bar.

“Why are you so down, then, if you were telling me last week to marry Amy?”

The Priest launched into some long backstory about a stupid problem where he didn’t think the people he was supposed to marry this week should get married and it took a really long time to tell where they still didn’t leave the bar. The bar where a Priest and a Rabbi just walked into, which was a cliché before clichés were a thing. Now they could have some kind of adventure, but noooooo they have to be stuck here, telling a story to—

“Excuse me,” The Rabbi interjected. “My friend is telling a story.”

Of course, it’s not like this is the only story that’s happening right now.

“That may be the case, but it’s still rude to interrupt or skip over things,” The Priest replied.

Which may have been true, but that doesn’t change the fact—

“That it’s cliché? What, a priest and a rabbi can’t get a drink?” the bartender may have had a good point with that last one.

Fine, a Priest and a Rabbi walked into a bar. It was a bar they had known for quite a while, and they were good friends with the bartender. They talked about love and life and the pressures of the upcoming weeks while sipping lukewarm beers and watching a game. Eventually, they would leave and have many adventures and maybe the Rabbi would address his gambling problem and maybe the Priest will deal with his marriage dilemma and maybe the bartender would find out that Amy was cheating on him with his sister, who was staying at his apartment for really interesting and exciting reasons. Amazing reasons that could only be described—

“Watch it,” said the Rabbi.

“She’s cheating on me?” asked the bartender.

The trio sat and talked and drank and enjoyed this one night, adventure free, apparently.

One thought on “A Priest and a Rabbi Walk Into a Bar, and the Narrator was not Happy”