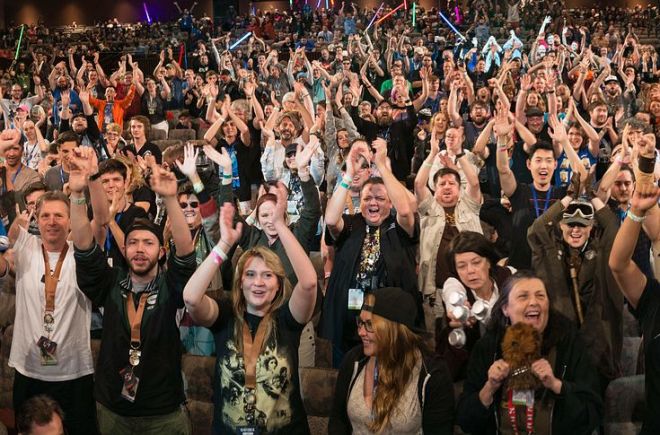 It wasn’t always a good time to be a fan of nerd culture. The idea that any studio would get together all of your favorite heroes (and Hawkeye) to make a mega blockbuster movie that was the result of 10 years of storytelling was flat out laughable. They used to cram as many villains into Batman movies because there was no real guarantee that we’d get another one.

I grew up in the 1980’s. Back then we just had the three Star Wars movies. Sure there was the odd Ewok centric movie that let us know what they were up to and featured Wilfred Brimley for some reason, but there were only three Star Wars movies, Han shot first, and the special effects were, in every sense of the phrase “for their time” when talking about how they were cutting edge. You’d get a few debates, a few jokes, but generally, disagreements which one of the books they should make into a movie if George Lucas ever made that sequel series he was rumored to be making any minute now. (Spoiler: We’d later find out none of them, apparently.)

Being a nerd in the 1980’s wasn’t always fun: we’d have to deal with roving bands of jocks wanting to destroy us, but it wasn’t like things are now. Toxic fan culture is really making it difficult to enjoy things.

I bring up Star Wars because a few weeks the latest Star Wars movie, Rise of the Skywalker, is going to be hitting theaters. A lot of us think this is a good thing: again, growing up it was a choice between the books or a heartwarming family story where everyone dies in the first few minutes for more Star Wars. (I can’t stress enough how disturbing the second Ewok movie is. That was for kids.) Naturally, this has brought up the debate about The Last Jedi, the most recent Star Wars that was met with… how do I put this lightly… controversy? Rabid, mad dog, rage? People going way over the top for a movie abut space-wizards fighting other space-wizards? Foaming at the mouth sheer idiocy?

For the record, I liked The Last Jedi. I thought it was a solid movie that would never be as good as the Empire Strikes Back, because that one was my favorite Star Wars and it probably always will be. But the way some people talked about it, you’d think that Rian Johnson walked into their homes, destroyed all copies of their old movies, and stole their favorite C3P0 toy. It was a good movie. Like all movies not called “The Big Lebowski”, it had flaws.

But what followed was a massive argument that went too far in getting the actress that played Rose, Kelly Marie Tran, to leave social media because a lot of ire on her, when her biggest crime was that she probably shouldn’t have rammed that ship at the end. (Seriously. What was it with people ramming ships into each other in that movie?) She was a good character. The entire thing was unnecessary. But toxic fans took it way too far.

Now, the flip side of that seemed to be that you HAD to like everything about it, or you were just as bad. That squashes some of the fun debate that should be around these nerd topics. Kirk or Picard? (Sisko. Always Sisko.) Star Wars or Star Trek? Transformers or Go-Bots? (Kidding. No one liked Go-Bots.) But there was an equally toxic group that made it seem like any talk that this movie wasn’t the most the perfect thing ever meant you were siding with the jackasses that bullied a woman off of social media. Most of us just wanted to enjoy a bunch of pew-pew lasers and maybe a fun look at what our old pals were up to when they meet their new pals.

The problem is, these voices continue to be the loudest. I use Star Wars as an example, but there have been so many over the years, it’s getting tiring. When the new She-Ra came out, loud people got angry about the fact that she didn’t look the same. Of course she didn’t, the old series was essentially a toy commercial which was spun off from what was essentially a toy commercial. Not to say I didn’t enjoy either, and still do. But why does it matter if there’s a new version for kids today? I’m a real fan, I’m glad the legacy of something I enjoy lives on, even if I don’t recognize it. We live in future times, if you don’t like the reboot, I promise you that you can find the original on any number of streaming platforms.

It doesn’t hurt to have something live on, even if it’s in a form that you don’t like or approve of. It allows someone to have that thing, that feeling that you had growing up… I want kids to be able to enjoy that. I want people have that discovery that I did. I may not get it. The thing is: I don’t have to. That’s what being a real fan is all about: wanting to show people something you love, and then letting them discover something they love. I’m happy that we’re getting these reboots, these new versions of shows. If I don’t like them, I have the ability to go back to what I want.

The thing is, when it comes to these things that we take comfort it, I think we tend to forget that we get them at certain times in our lives that help make us who we are. I’m going to go bak to Star Wars for a moment, because that’s a nice thread to wrap us up on. I discovered Star Wars because my father really wanted to show it to me. It’s was a nice bonding experience with him, and I wanted to know everything I could about it because it let me connect with him. Nothing will take those memories away. We still discuss it now, and yes, we even discuss if the “new ones” are better than the “old ones.” (We like Attack of the Clones, Revenge of the Sith and The Force Awakens, the Last Jedi, we’re so-so on the others. We do agree that Rey is pretty awesome as a new Luke Skywalker, though.) But that’s why it’s important to me.

Even now, there’s some kid who doesn’t fit in who gets to connect with someone because of these stories. What they don’t need are people who think they own them for some reason trying to make it about them. Debate is fine. Debate is what got us here in the first place. But to latch onto it… to bully people… to make things terrible for people who just want to enjoy a movie or tv show, or worse, act in in… that’s too far. Toxic fans are too much. Real fans, the ones who want to share what they love… we deserve a lot better than to be represented by these loud people who just want to bully people.