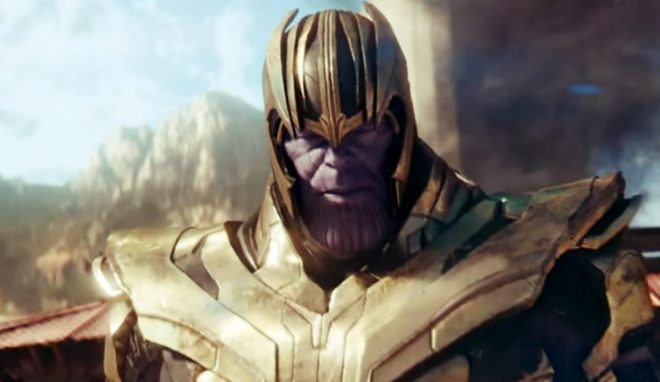 I think we forgot just how epic the original Avengers movie was. At the time, no one had put together a superhero lineup like Iron Man, Captain America, The Incredible Hulk, Black Widow, Thor, and… well, Hawkeye, I guess… and give them their own team-up movie, built from their own solo movies. We can look back at how it seems almost quaint now, but the movie was difficult to pull of at the time. Avengers: Infinity War needed to not just clear that high bar, but exceed it.

Avengers: Infinity War follows the Avengers and the Guardians of the Galaxy (but no Hawkeye) as they face off against Thanos, the giant purple alien responsible for the destruction of New York in the original Avengers, and sent Ronan the Accuser to dance off against the Guardians of the Galaxy in their original movie. A lot happens in this movie. Basically there’s these stones that are briefly referenced in a bunch of Marvel movies, Thanos wants them to bring balance to the Universe. The good guys don’t want him to get it, because his definition of bringing Balance to the Universe involves a lot of killing. So, they think it’s a good idea if he not get his hand in a glove that was possible to do this. Oh, and Thor, Rocket Raccoon, and Groot go on a side quest to undo the main message of the last Thor movie.

A movie like this one takes a lot of balance, much like our big purple bad guy would talk about: Thanos needs to be introduced (his previous introductions are sort of…there, but they don’t cover a lot of what he wants. In fact, the first time we meet him he gives away one of the stones to Loki.) and the heroes, whom we have been watching, need to be given a good introduction. The best way I can describe it is similar to a genre of writing called Novel in stories, in which an overarching novel is divided up into a series of short stories. There’s the Iron Man, Spider-Man, and Dr. Strange Story. There’s the Thor and the Guardians of the Galaxy Story. There’s the Captain America and his Secret Avengers Story. They all add up to a bigger part of the whole, which is this battle for saving the very universe from Thanos.

Thanos himself is portrayed as an almost sympathetic character, which is a huge change from his comic book counterpart. In the comics, Thanos is a mad Titan obsessed with impressing the literary personification of Death: and does so by getting the Infinity Gauntlet and wiping out half the universe, presumably before gluten can do it. In this, he feels that it is almost his holy task to balance the universe, wipe out half the population in the fairest way possible, so that the other half will have a chance to balance out their resources. Basically, he wants to save the Universe by killing it, much like the main bad guy in the first Kingsman movie, but without the henchman with knives for legs. (Hopefully, half of those wiped out weren’t like… new parents, or doctors, or people who’s death wouldn’t lead to another group of the population dying. Just… throwing that out there.)

While I personally liked this change, and it added some pathos for Thanos, giving weight to his story and making it more than that of “how cool is Iron Man’s armor now because he can punch intergalactic bad guys now.” But I feel that this kind of highlights a little bit of a weakness in Marvel’s sprawling strategy. Marvel prides itself in connecting many of it’s properties: even the Netflix shows occasionally mention what’s happening in the movies, but for all of the storytelling, Thanos’s development is limited to this movie, when there was a bigger opportunity to tell his story. We got references to the stones and references to the man himself, but most of the heavy lifting is done in this movie, and those are the moments where it really drags. There was plenty of time to sort of build him up as this threat, but in the end, we got a few scenes in which he sent lackies to do most of his work. I personally felt that was a minor weakness of the movie: We’re supposed to get this scope of Thanos as a Shakespearean character, but in the end we get someone who’s building up to the guy who’s going to punch the Avengers for a few minutes.

These are minor complaints, honestly. The movie itself manages to pack lot into it’s two and a half hour runtime. I don’ t mean to point that out as a bad thing – all of the time is used very economically, and upon second viewing I’m really not sure what I would cut. If anything, the Russo Brothers might have wanted to expand it to three movies, but then that would have taken away the impact from the ending. They balance so much, and we do get some good moments with each character, which is impressive given the sprawling cast.

Ah, the ending. I won’t spoil it here, but it does indeed end of a cliffhanger of sorts. The brilliant thing about this particular cliffhanger is that it does close up one story – Thanos’s – While still keeping open the possibility that they’ll make Avengers movies until the end of time itself. What I like about this time, with an ending like this one, is that this right now, is our only time that we can talk about Avengers: Infinity War the way it is today. The second part will change our perspective, either because something was undone (or wasn’t undone) or because we’ll get some new perspective on the movie itself (like the fact that Hawkeye was actually in every scene, we just couldn’t see him.)

There’s a lot to unpack with Infinity War. The Russo Brothers have crafted an interesting movie, one that is able to capture the superhero fan in all of us, and create team-ups we have wanted to see, all while keeping the movie itself pretty manageable. Does your favorite character get a lot of screentime? Probably not, but I can promise you that they make the most of the time that we do see them, whether it be Peter Parker hanging off the side of a bus, or Doctor Strange and Tony Stark trying to out-quip each other, or Captain America being all broody.

It’s a spectacle, and a great one. It’s a great way to start this Summer movie season. It’s a fun movie that completes an interesting arc, but leaves you wanting more. I’m interested to see what they do with the next two movies in this series, Ant-Man and the Wasp and Captain Marvel, and how they’ll end up tying into the larger story that is Avengers.