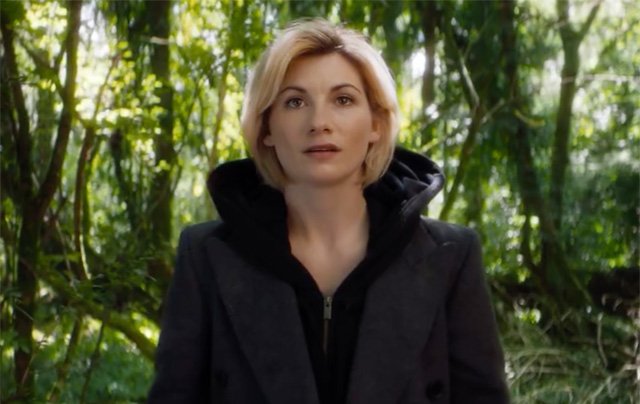 I still remember the first time I saw Doctor Who. There was a strange man wearing a long scarf getting out of a blue box that he said was a spaceship of some kind. Everyone spoke with a British accent, which at the time I took to mean was something sophisticated, all the while everything I was watching – something about aliens and silly special effects – was definitely not sophisticated. It didn’t make sense. I was young, and I didn’t really get it. I’d eventually grow to appreciate Doctor Who enough to eventually claim Tom Baker as “My Doctor.” Everyone has their Doctor… the one who got them into the show. The one who made them appreciate the fact that the special effects aren’t great, that it can be cheesy at times, but it has a spirit of hope that has made it last for over 55 years.

The appeal of Doctor Who is that anything can happen. It’s about a time-traveling alien who goes off on adventures, not because he has to, but because he is needed. He’s a hero that has taken the name of a helper, who carries a tool to build instead of a weapon to destroy. His adventures can happen anywhere, from weird alien worlds to Shakespeare. He has his dark moments, but he always turns those dark moments into moments of hope. Oh, and every time the Doctor is injured, he regenerates into a new face, and a new actor takes over. The number of times this has happened… well, that’s complicated. There was a secret Doctor we just found out about, but they didn’t change the numbering, so we’re all just going with it. You can get a few people who’d argue, but seriously… just go with it.

Peter Capaldi, the incumbent Doctor and the 12th long-term version, has decided to leave the show, and pass the torch onto the 13th Doctor. On Sunday, we finally found out who the new Doctor is… Jodie Whittaker, the first woman to take on the role. Naturally, everyone is very happy, and there are no debates, and everything is going off without a hitch.

Just kidding, this is 2017, and if people aren’t complaining, then did it really happen?

I’ll be honest, I don’t want Peter Capaldi to go. That’s separate to my feelings on Jodie Whittaker taking over the role of The Doctor. I loved his interpretation of the character, all at once a warrior and a healer who was unsure of who he was. His speech about the nature of war still gives me goosebumps, and when he told Clara that he was her friend even if he betrayed him was heartbreaking and wonderful. Don’t get me started on his feelings on Alien (Really offensive… no wonder you keep getting invaded.) I’m extremely sorry to see him go. I met Peter Capaldi at a convention once. It’s obvious he loves what he does and he loves his fans. He was The Doctor.

Now it’s time to pass everything on to another actor. Because that’s what happens with the Doctor. It happened with David Tennant who famously “didn’t want to go.” It happened with Matt Smith, who would always remember when he was the Doctor. In this case, we not only get a new Doctor, but a first: the first female Doctor. Which is a welcome change. Not a moment too soon, as another Doctor said. Change is what always happens with The Doctor, because that’s an element of the show – The Doctor changes, he gets new companions, but his mission is the same: to explore time and space and saves people who need it.

I don’t know too much about Jodie Whittaker. I didn’t really see much of Broadchurch. I know that she’s worked with the new show runner, so he obviously has a storyline in his head for her. But take a look at that first moment she sees the Tardis in the real video. That’s the face that best Doctors have given when they see the Tardis for the first time. These are people who understand that the Tardis is a space-ship… it’s a friend. To me , in that one minute, she’s gotten it perfectly right. She gets it. She gets something important about this character.

I get that this is a big change: it’s one of the biggest changes in the show’s history. But it’s really a welcome one. The Doctor is bigger than the actor playing him or her (as we can now say.) The Doctor is about not being cruel or cowardly… it’s about accepting people and seeing the good in them. We just finished a storyline where the Doctor tried to change his biggest enemy into his ally. Because he saw the good in his friend. This is still a show that featured a lizard woman and her wife… this show has always been about new ideas. What’s wrong with this one, the Doctor regenerating into a woman? It’s part of what makes this show special – literally anything can happen. Why is this out of the realm of possibilities?

I’m really looking forward to the new Doctor. Well, as much as any Doctor before – I’m always going to miss the previous Doctor. But I’m looking forward to the new stories, I’m looking forward to seeing what she is going to bring into this role. Each Doctor has added something new: Tom Baker let the real weirdness of the character forward, John Hurt added some gravitas of a difficult decision, Matt Smith added some youthful fun, Colin Baker added that stupid multicolored coat. What the hell was up with that? Can we agree that Jodie Whittaker shouldn’t wear a stupid multicolored coat?

Look, it’s a big change. I get that. But it’s one they’ve been hinting at for a while now. First, when 10 regenerated into 11 he thought he was a girl. Then the Master became the Mistress, and that was fun. Now we’re getting something new.

The biggest thing as fans we have to remember is the Promise. Never cowardly or cruel. It’s a brave step to make this big a change on a show that we love so much. It’s one that I love. it’s one that has meant a lot to me. It’s one that has survived as a reminder that anything is possible. One of those possibilities is that one of the many, many, many regenerations is a woman. It opens up a lot of storytelling. And it’s about time. There are plenty of Doctors I can relate to. I’m glad that there’s going to be a Doctor that young women can relate to. I’m glad that this hero that I love can be shared even more. So, welcome to the show, Jodie Whittaker. Welcome to the new Doctor.

Just as long as she doesn’t have a multicolored coat.