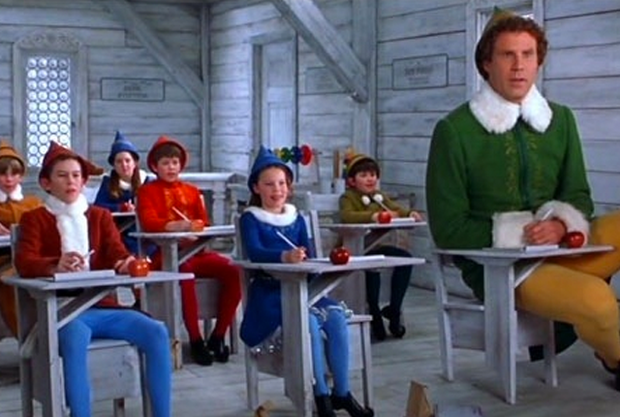 So there’s this jolly fat guy. A mystical magical dude in a red suit who, every year, brings us presents. Since bringing presents to all the good little boys and all the good little girls is a tough job, we’ll give him helpers. Elves. Not like, Orlando Bloom Elf, but short little comical guys. Think Snap, Crackle, and Pop, but without the whole cereal thing. Now, let’s take one of the tallest, goofiest guys in Hollywood, and let’s have him play an Elf.

I’m trying to imagine how the pitch meeting for the movie Elf would go.

The 2000’s were a golden time for Will Ferrell, as the genre: Will Ferrell plays a [insert job here]. It would immediately spawn a million catchphrases, and be quickly forgotten until Will Ferrell went on to play the next wacky thing. Newscaster? Check. Basketball player in the 70’s? Sure, why not? Race Car driver? Coach? He’s had more jobs than Homer Simpson.

It would be easy, then, to dismiss Elf as another version of that, only this time instead of racing around the track in his underwear, he’d run through a revolving door because it was fun. But no, Elf will always have a special place in my heart, because it’s a movie about belief.

For those of you who don’t know, this is a movie where Will Ferrell plays Buddy, a human raised by Elves. After it becomes obvious that he is, in fact, not an elf (due to his low workload, and the fact that he’s five times as tall as everyone else) he decides to set out to meet his real father, played by James Caan. Peter Dinklage is also in this movie, too, before he was Lannistering it up in Game of Thrones. Also, Zooey Deschanel in a rare, non-quirky role.

The coolest part is that it was also directed by John Favreau, well before he kick-started the Marvel Universe with Iron Man. Sadly, there are no terrorist-seeking missiles in this movie.

The premise of Elf starts out, as I mentioned, pretty much as Will Ferrell plays [wacky elf]. And it could have remained that way, too, if it weren’t such a sweet movie about the power of belief, and the power of being who you really are.

Buddy, growing up in the North Pole in Santa’s workshop was essentially a non-stop party of toys and candy. Which sounds kind of amazing now that you think about it. But the one thing that really helped him out was the unwavering power of belief. Not just in Santa, but in his own abilities. In fact, it was the questioning of that beliefs that eventually get him to find out who he is.

What sets this movie apart from so many others is what this movie isn’t. It could have easily devolved into a much more cynical movie. Buddy’s father isn’t exactly thrilled to see him when he shows up, not really realizing that he ever had a child. I mean, Buddy’s origin story was always going to be somewhat tragic: he was essentially kidnapped by Santa and was raised in the North Pole for however many years we’re going to say Will Ferrell is in this movie (living off a diet of soda and candy.) It’s tough to make that a very happy story, but Favreau still manages to give us something that we can look forward to.

And really, that’s what makes this movie kind of unique. There’s a darkness that lies underneath everything. Buddy’s father is a children’s book publisher, but it’s treated like an industry rather than a magical place that provides literature to children. Even Peter Dinklage playing off the one-note that he’s an “elf” is crass and just wants to be paid, something that Buddy can’t quite comprehend. This could easily be a dark story. Buddy’s entrance, especially in New York (in 2003, a time when New York needed that bright light) adds an air of levity to everything that could easily be a joke. I mean, some of the best laughs, yes, are Buddy adjusting to the real world, which isn’t as magical as the Rankin-Bass special he lived for most of his life. But it could have been a much crueler look at his happiness, one that saw him living his life back in the human world as a real human.

But Buddy never really loses that childlike glee. And that’s important. It takes the edge out of darker scenes, even moments when he’s essentially spying on eventual love interest Jovie in the shower. He’s attracted by her singing, and just sort of hangs around a little too long. And while many characters do start to buy into this whole idea that may be a creep that’s hiding it really well, they quickly change their minds because that’s what this movie is about: it’s about being who you are, unabashedly, and about how sometimes we need to smile and be goofy, because that’s what we do.

The late act where Santa is stranded in Central Park could come across cheesy as well, but instead it’s actually another testament to not just belief, but belief in what Buddy represents. Yes, there’s the odd Central Park Ranger moment that seems extremely out of place, but that can be overlooked while we enjoy the fact that it takes some singing to get Santa’s Sleigh back up in the air.

Overall, this movie provides us with that idea that hope isn’t that far off. Christmas is a time when we’re supposed to hope a little more, let some of that holiday spirit get into us just a little bit more. But it says something that a man who’s known for making movies where he primarily mocks whatever is going on, has taken the time to make one that loses the cynicism in the wake of something more.

Next week: It’s Die Hard. Why did you think it was going to be anything other than Die Hard. Seriously, it’s like you don’t know me.