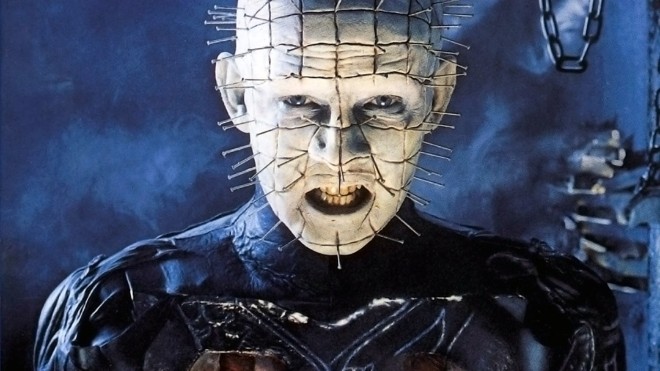 It’s been a while since I’ve done one of these, but I’m glad to be back. I’m a long way from crapping on the lackluster blockbuster season over the summer, so I think it’s high time to go back thirty years to cover some lesser known cinema by one of the most versatile creators of our time, Clive Barker. It’s almost Halloween, so let’s follow the man’s filmography for a more adult-oriented spooky showcase.

I have such sights to show you…

To begin this macabre showcase, a little intro on Mr. Barker himself. He’s a British author, painter, playwright, actor, screenwriter, director, and video game designer. I wasn’t kidding when I said he was versatile. Bursting onto the horror scene in 1984 with his Books of Blood, a series of anthology volumes, Barker made a name for himself with his unique blend of transgressive horror. Coming from the “splatterpunk” literary movement of the time (meaning, screw subtlety, let’s linger on all the gore! Throw in some testicles for a laugh!), Barker would later transcend his gory roots to create his own blend of dark fantasy and horror. His work is known for being very frank in its depictions of sex and death as well as taboo subjects, particularly S&M. In short, he knows fully well of parts of ourselves that we are told to keep hidden, and in a sense his work shows that he’s not afraid to really let loose his creative energy to enchant his audience or make them squirm.

Which brings me to the low-budget neo-Gothic horror film that could, Hellraiser.

Based on Barker’s own novella “The Hellhound Heart”, Hellraiser was written and directed by the man himself. He has been quoted as saying he wrote the novella to adapt it into a film. But in any case, this 1987 film not only became a success by grossing far more than its dirt cheap budget, but also spawned one of the most recognizable movie monsters/villains to come out of the 80s horror scene: Pinhead, played by Barker’s own friend Doug Bradley.

But in any case, the film follows as such. Resident hedonist and sexual deviant Frank Cotton (Sean Chapman) buys a puzzle box from some mysterious street vendor in Morocco. He opens the box only to be ripped apart by chains while the attic he was in turns into a demonic S&M dungeon and strange beings walking around menacingly. One of them puts pieces of his face back together.

Cut to Larry (Andrew Robinson), Frank’s brother, Larry’s new wife Julia (Claire Higgins) and daughter Kirsty (Ashley Laurence) move into the same house Frank resided in, it apparently being the brothers’ grandmother’s house. With that little tidbit of info, we see Frank for the fiend he truly is!

In any case, Julia and Frank have some history as they had a short lived affair before she was married to Larry. Sure, Frank’s kind of a douchebag and not exactly gentle with lovemaking, but Julia loves her a bad boy and thus has been obsessed with him all the time she’s been married to Larry. But through some vaguely explained supernatural phenomena involving blood dripping on the spot where Frank “died”, Julia’s lost love regenerates into a skinless ghoul who pleads with her to find him more blood so they can be together and he can escape the Cenobites, demons he sought for their storied ability to provide ultimate pleasure, before they discover he’s escaped them.

I’ll first get the flaws out of the way. When going into this film, don’t expect many things to make logical sense, character and plot wise. Characters do things more often to advance the plot rather than any sense of behavior established by earlier actions, and the rules of this strange universe don’t add up. For example, why does the blood bring Frank back and why can he suck blood? What’s the deal with that monster that chases Kirsty or the homeless man/skeleton demon (don’t ask)? And was Frank just killed or was his soul taken while he was killed? The film attempts a sort of dream logic in as much that we kind of have to buy all the weird events as they come, but there’s just not enough solid explanation or consistency with any of this. Things happen that feel like they were inserted to be weird or gruesome and little else.

And yet, the film endures in spite of these issues. It plays out like a sort of twisted melodramatic romance meets Faustian morality tale, with gory violence and gruesome imagery crossed with soft lighting and sweeping violins. It is a supernatural horror, sure, but the demons are not really the villains. Pinhead and his kinky buddies don’t show up until over an hour into the movie, and even then their screen time is still small. They’re more of an unaffiliated third party, not really taking pleasure in their nebulous duties of torturing idiots who open the box like typical demons would. This vision of Hell is one where those within go to suffer, but they went willingly. They went in pursuit of infinite pleasure and got exactly what they wanted, but with the addition of the other end of the spectrum. Julia, of all people, longs for something that she can’t have, and Frank wanted something to satiate his ravenous sexual desires. Now she kills people to gain his love while he pays for his really bad idea with the very skin on his back. In short, they’re perfect for each other in their deplorability and their unattainable desires.

When Hellraiser first released, it was derided by the likes of Roger Ebert for being a “bankruptcy of imagination”. Considering the time he wrote this statement and what has come after this film, I feel that is a gross exaggeration. Hellraiser is certainly imaginative in its bloodletting and portrayal of forbidden passions gone mad, but it’s nowhere near as awful as Ebert feels it is in his review all those years ago. The film wants to shock you, sure, but the way it achieves this makes me liken the experience to a beautiful nightmare. It’s gruesome, disgusting, macabre, surreal, and enchanting all at once. Check this one out for Halloween if you want a good scare. Just be careful if you’re squeamish, ‘cause this one’s pretty gross.

And don’t make deals with S&M demons. That rarely works out in your favor.