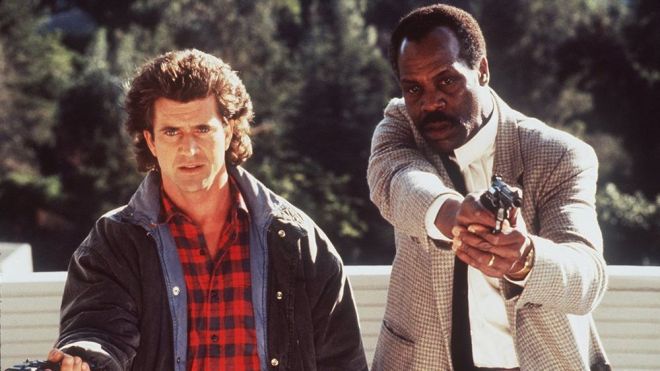 Warning: Spoilers for Lethal Weapon 2, a classic movie you probably should have seen.

What works: Honestly, one of the things that impressed me most was the usage of the film’s South African villains. As a member of a generation raised in a post-Mandela world, we can tend to forget that apartheid and white South Africa were hot-button political issues. While the villains are a tad one-dimensional (they’re like Nazis in an Indiana Jones movie, more or less), I applaud the film for taking what couldn’t have been an easy route back in the day, and choosing to confront a controversial issue head-on.

I also like how this film starts in the middle of an impressive chase sequence, as if no time had been lost since the last movie. The revelation that the villains of this movie were responsible for the death of Riggs’ wife could be too superficial or convenient in any other movie, but in this one, I think it serves the plot fine, particularly after the plot twist where his most recent love interest, Rika (Patsy Kensit) is killed. And while his performance in this film probably ranks somewhere in between Home Alone 2: Lost in New York and Michael Jackson’s Moonwalker in terms of his overall output throughout his entire career, Joe Pesci is a welcome addition to this movie and adds a chemistry and energy to the already-solid Murtaugh/Riggs dynamic.

What doesn’t work: I think the greatest sin of Lethal Weapon 2 is in regards to tone. I think of the first one as being similar to Die Hard: a mostly-gritty action movie with some humor and quick, funny dialogue thrown in for good measure. It seems to me that for the sequel, they decided to go the route of something like Beverly Hills Cop: do what is essentially a comedy with a few impressive action set-pieces and a plot that allows for action-intensive scenes and detective work. As a standalone idea, it isn’t bad if not a little cliché (especially given how many other Beverly Hills Cop rip-offs were produced during this time), but as a sequel to the first Lethal Weapon, it doesn’t ring true to as a successor to the original movie. There’s a memorable sequence where Murtaugh is stuck on the toilet, afraid that a bomb might go off after he reads a threatening message written on his toilet paper. It’s not a bad sequence, but again, it doesn’t feel like something that should be in a sequel to Lethal Weapon. The series that began with a first installment where the reoccurring joke seems to be about Murgagh’s wife’s cooking now has to resort to literal toilet humor? It’s a ridiculous decision. The same goes for Riggs’ usage of Three Stooges sound-effects and voices in fight scenes, it just doesn’t fit the tone of the movie well. I get that maybe they wanted a plot and comedy that was a little lighter than the first movie, but doing so undid the perfect balance of comedy and action the first one did.

Final thoughts: Parts of Lethal Weapon 2 are everything a sequel should be: we learn more about the characters and their backgrounds, they’re put in a situation even more dangerous than what they were in during the first movie, and everything is bigger and better this time around. But then the filmmakers also seemed to want to make a different movie from the first one, something that exaggerated the original film’s humor and wackiness. It rubs me as a little disingenuous to the spirit of the original film. In fact, screenwriter Shane Black originally wrote a much darker version of the script where Riggs is actually killed off. While we can wonder about the implications of that until the cows come home, the fact is that vision so contrasts with what we got that it’s hard not to wonder about the possibilities of what could have been.

Overall, Lethal Weapon 2 is… fine? As a big fan of the James Bond movies, it reminds me of some of the Roger Moore-era Bond movies. They’re not bad, per se, but there isn’t much of an excuse for them to exist except to check in with the characters. The script has genuine moments of insight, or really gripping action sequences that are quickly followed by weird attempts at humor and slapstick. At this point, I don’t know if this change in direction will affect future installments, but I hope that a bit of course correction happens for the next installment.