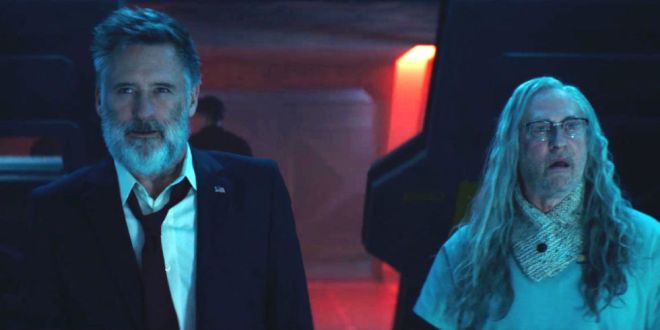 It’s a sunny day outside of the 20th Century Fox Studios, a few years ago presumably. I imagine boardroom, filled with executives, all sitting in fancy chairs, no one wants to be in the meeting, but they all have to be there. It’s time they start planning the next few years of movies. One executive, I’m going to call him Chet because this is my fantasy. Anyway, Chet stands up and pulls out a red folder from his black leather suitcase that sits on the freshly polished table, made out of a wood that can only be found deep within the rainforest.

Fourteen men died bringing this table that Chet is now standing in front of.

“Gentleman and ladies,” he says, because Chet is a little bit old-school, and the presence of two new lady-executives scares and confuses him a little, “There has been no movement on the Independence Day sequel in quite some time. I have here the answer to our prayers.”

The head of 20th Century Fox, who until this moment had been wondering if tonight was his night with his wife or his mistress turns his head.

“Is… he coming back” the man asks, raising his head hopefully.

The other executives and lady-executives start grumbling to each other.

Chet reaches into the red folder and brings out a contract, “You know the guy who played Data on Star Trek: The Next Generation who was in the first movie for five minutes? He’s coming back. And we’ve found a way to put him in more of the film.”

The head of 20th Century Fox tents his fingers, and stares out the window.

“Make sure the writers dedicate 20 minutes to him not wearing pants, then produce it.”

Now, I don’t know if that’s how it really went down, but I can imagine it was something similar to that.

Independence Day: Resurgence picks up twenty years after the first movie. And if you forget, don’t worry, because they spend a good portion of the first hour reminding you that it’s been 20 years since the first movie, and humanity has all come together in peace, love, and harmony, all dedicated to stopping the alien threat.

Except for one African tribe who was totally on their own while fighting a group of aliens who somehow didn’t power down after the first mothership was destroyed. You see, the aliens are like bees in that there are drones and a queen, and when the queen is killed they all shut down, because writing is hard. Except, apparently, this group of aliens, because once again: writing is hard.

The humans are just getting around to putting up a laser on the moon when disaster strikes and the laser falls, forcing Jake (Liam Hemsworth) a disgraced pilot, to save everyone. Since he’s disgraced, he’s reprimanded, despite saving everyone. Fortunately the laser is in place, because a ship comes through some kind of wormhole, and humanity, having been burned 20 years ago, blasts it to smithereens.

I’m going through my notes, and wow a lot happens in this movie. They’re getting ready to set up for the 20 year anniversary of the attack, President Whitmore (a bearded Bill Paxton) is slowly losing his grip on reality. Dylan Dubrow-Hiller (Jessie User), our Will Smith stand in is making sure to show as many pictures as possible to show that his father was Will Smith (and has angst and history with Jake and Patricia Whitmore, the President’s daughter and one time pilot now played by Maika Monroe). Jeff Goldblum is back as David Levison, still doing science things, and hilariously getting harassed by a government worker who’s name I didn’t care to know because to whole thing was that stupid. Oh, and the aliens attack again, this time given a motivation in the form of drilling to the Earth’s core for some of that sweet, sweet, magma. Oh, and don’t worry, Judd Hirsch is back to have wacky antics while stuff is blowing up.

Whew. I guess my first complaint is that the movie is overstuffed, but we’ll get to that.

Remember how great the first Independence Day was? This movie really does.  I think a lot of people forget that it wasn’t a masterpiece in storytelling, it was a fun ride and disaster movie, but a different kind of disaster movie. We got the iconic image of the White House blowing up, and the end was silly… we hack into their computer with an Apple Macbook and save the day. The problem is that the first hour of this movie really wants you to remember how great the first movie was, all while setting up a lot of plot.

The problem is, the cool stuff is glossed over and not explored. One of the greatest things about this movie is that it’s a true follow up to the previous movie in a way I think is often ignored by delayed sequels. Things just aren’t updated to “today, but with the memory of a horrific attack.” But we used the technology we found in the alien database to upgrade not just weapons, but all technology. The thing is, part of that is glossed over, and flat out ignored when it needs to be. A good portion of the movie involves an old bus, or some slick iPhone product placement when we just saw someone pull out a futuristic phone and make a call from the moon.

Another standout moment comes in the form of the speech that’s supposed to be as epic as the President Whitmore “Independence Day” speech from the 1996 film, but falls completely flat… one of the lines (featured in the trailer) is that “we told a generation that this is a fight they can win.” That’s looked at slightly, but pushed aside for petty differences between Jake and Not-Will Smith, or Jake’s best friend chasing after a hot pilot chick because why not. I get there was humor in the first movie, but most of that came from Will Smith and his ability to… well, be Will Smith. It was the cocky pilot working with the clueless scientist. Now everyone wants to be the cocky pilot, and throw everything else to the wayside.

The problem is that there is so much information and plot dumped into this movie, they’re not sure where they want to go with it. And it ends basically with a “to be continued.” This movie justifies most of its existence by arguing that it would have been an excellent limited Netflix series, rather than a disappointing, too short movie.

Independence Day: Resurgence had so much potential, and the movie itself is oozing with that potential. There’s even a cool little reference to people thinking the first movie was just a conspiracy. The problem is, it doesn’t give itself time to breathe. It sets up inconsequential in-fighting and a world that needs to be explored, but isn’t. Which is a shame, because it should have been great.