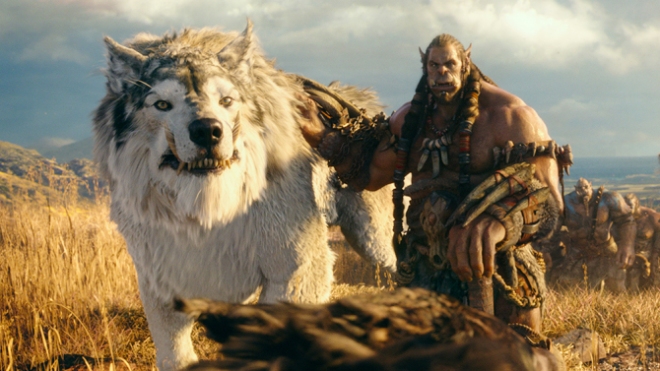 I know nothing of Warcraft, yet when I saw commercials for the movie, I really wanted to see it. From the previews to the actual movie-viewing, the surprises of Warcraft seemed to keep coming. This was in no way the best fantasy movie I’ve ever seen but it had charm and all the elements you would expect from this type of movie. When it started, I thought, “Cool, this is like a Harry Potter type world filled with magic and monsters and adventures.”  That impression was correct… ish since the fantasy of it all is what I think interested me in the first place.  However, as the movie progressed, I began to see deeper issues and meanings like good vs. evil, light vs. dark, our own destruction vs. our salvation. Many great movies, stories, and novels have these elements. For example, I’ve seen tons of books and analysis on Star Wars and Lord of the Rings, but I did not expect to see that deeper meaning in Warcraft. What struck me as unusual and almost blunt, was the many references to the Bible, particularly the Old Testament.  While I am not an expert on the Old Testament or Jewish teachings, the little I do know was apparent to me in this movie.

Let me begin with a brief synopsis.  The world of the orcs, Draenor, is dying, so the orcs, led by Gul‘dan, build a portal to come to the humanish world of Azeroth and make it their own.  The portal is built by dark magic known as “the fel” which feeds off the life essence or souls of other beings.  A warrior couple, Durotan and Draka, are one of the first groups to come to Azeroth through the portal.  Immediately upon entering this new world, Draka goes into labor and gives birth to a son named Go’el.  Much fighting follows between the groups. King Llane and his right hand man, Lothar, are introduced along with Medivh, the guardian of the land.  Medivh is a powerful wizard whose main job is to protect Azeroth.  Another human, Khadgar, is introduced as a former student of magic and becomes the unlikely hero who will one day become the guardian of the land. Last but not least, there’s Garona who is half orc and half human and moves the plot along in various ways.

So, where do the biblical references come in? When we first meet Medivh, he is building a Golem. A Golem is a creature that is made from clay or earth and then brought to life through magic.  This creation from earth is somewhat reminiscent of Adam and Eve.  Furthermore, I’ve heard references in Jewish folklore of the Golem and how this creature defends the Jewish people from time to time.  The Golem is significant here because by the time he is brought to life, Medivh has succumbed to the fel and is on the brink of destroying Azeroth.  Along with the help of Khadgar, Medivh’s own creature turns on him and defeats him, essentially protecting the chosen people from the evil fel. After this occurred, I was left wondering why Medivh created the Golem in the first place. My guess is that he predicted he might become compromised and created something that could destroy him if need be.

The next biblical reference that stood out to me is a nod to David and Goliath.  In one scene, Lothar, a human, stands alone to fight against a giant orc, our “Goliath” here. While Lothar does not win, he also does not die and continues the fight for freedom. The This image of the tiny human standing against the giant orc is played out over and over again in the fight scenes, deftly pointed out by the camera angles.  Another David and Goliath moment is when Garona gains honor among the orcs by killing a human of status. Since she is half-human (presumably), she is tiny in size compared to the other orcs and lacks standing – both literal and social.  She does not kill an orc to gain her status and power, but inadvertently defeats her own Goliath of discrimination and ends up gaining the respect of her fellow orcs.

Another biblical/Jewish reference is the presence of the fel which drains the life force or soul of innocent creatures in order to gain power.  Jewish legend speaks of the dybbuk who is a demon that sucks the souls of the good and wreaks destruction wherever it goes. I am sure that this concept can be found in many cultures and legends, even in the modern day Harry Potter. Like the dybbuk, the fel has destroyed the land of the orcs and is on its way to destroy Azeroth.

The final biblical reference that really stuck out to me is when Draka is forced to send her infant son, Go’el, down a river in a wicker basket in order to save him from being killed during the battle.  In the bible, Moses was saved the same way and was later discovered by an Egyptian princess and raised as her own. Moses later becomes a leader of the Israelites who brings them to freedom. Similarly, it appears that Go’el is found by a human. I am curious to see if in future sequels he too becomes a leader for his orc race and possibly all of Azeroth, ridding them of the fel.

I’m sure there are many more biblical/Jewish themes throughout the movie that I have overlooked but these were some of the elements that stood out to me.  So in addition to being a fun fantasy movie, I enjoyed discovering the deeper references in Warcraft.

One thought on “Bibical Themes in Warcraft”